The mural decoration of the church is no less impressive than its architectural forms. The icons were painted in a majestic hand with exceptional precision and staunchness exhibiting a great fortitude of spirit. All the walls and vaults of over 2 000 sq. m. were covered in icons. Hundreds of compositions were painted, while the number of figures in the compositions exceeds several thousands.
The frescoes were made in several stages in 1597, 1632, 1638, 1643, 1649, 1681. Thus for about nine decades there emerged a unique ensemble and there is no second to it in the Bulgarian lands in terms of thematic diversity and breadth.
The images of St. Theodor Tiron and St. Thedor Stratilat survived from the original icons in the naos in 1597.
The frescoes that we can see now date back to 1681. As this part of the church stands for the earth, the emphasis in the compositions was on the life of Christ – the Feasts, Passions and Miracles of Christ are displayed. 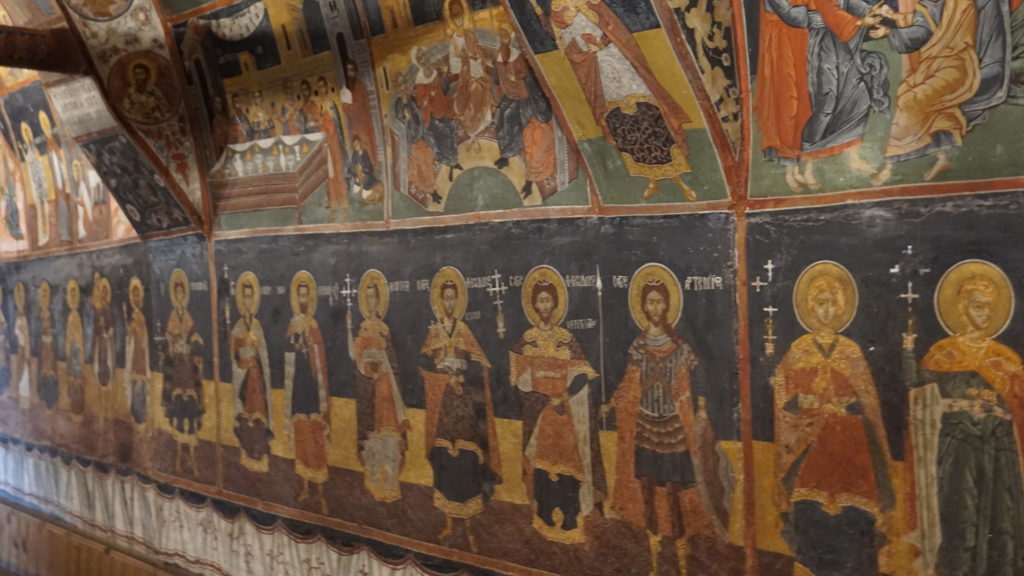 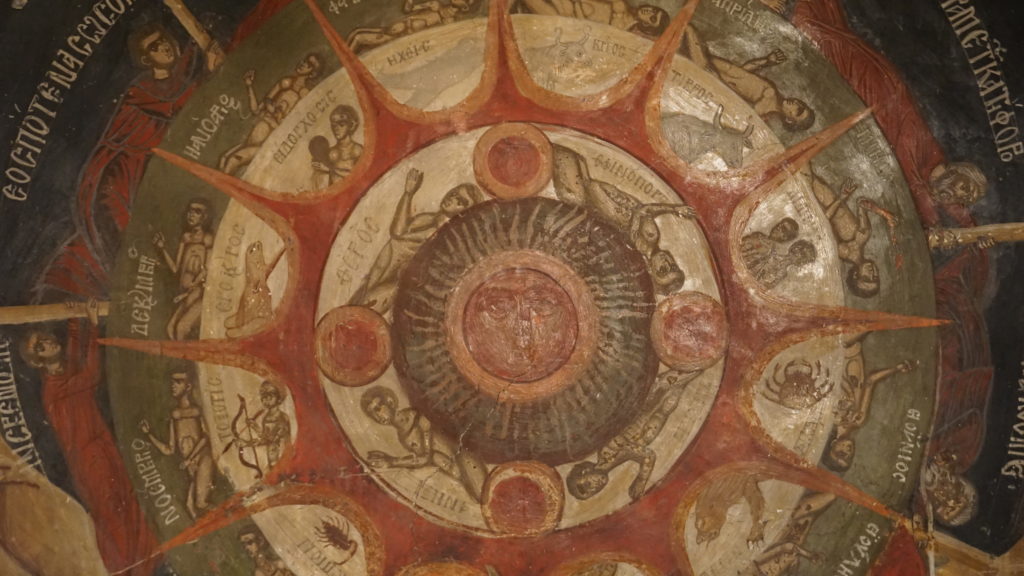 The scenes of Nativity, the Presentation of Jesus at the Temple, Baptism, Christ entering Jerusalem, the Last Supper, the Kiss of Judas, Golgotha, the Descent from the Cross etc. are particularly evocative.
There are three painted images along the entire vault from east to west – Christ Emmanuel surrounded by the symbols of the Evangelists, Christ Pantocrator drawn heavenwards by flying angels, seraphim and cherubim and the New Testament Trinity – God-Father (Savaot), God-Spirit and God-Son surrounded by angels. The central place of the western wall is dedicated to the composition of Mary’s Assumption, while the Nativity of Mary and the Presentation of Mary

are placed on either side. In the lower band full-size images of warrior-saints, martyrs, healer-saints and the reverend were presented – Mercury, Nestor, Dimiter, George, Cosmas, Damian, Panteleimon etc.

The iconostasis is performed in magnificent gilded fretwork woodcarving. Icons of various sizes are fitted into it and the most impressive of them are the painted panels depicting plots from the Creation of the World.

The coat of arms of the Kantakouzenos family, that donated the resources for the work, was carved in the middle of the iconostasis. narthex of the church was used as women’s department. There is a multi-figure composition on its western wall illustrating the issue of the Day of Judgement. It was composed around the patron scene of Nativity. Of particular interest are the edifying depictions of suffering sinners presented on the northern wall. The lower band of the women’s department is dominated by the depictions of women martyrs – Agatokla, Pelagia, Theodora, Makrina, Theofano, Anastasia of Rome etc.
The topic of Mother Mary is widely used in the big compositions the Protection of Mother Mary, Rejoicing for You, the Wedding in Cana of Galilee and a full set of the Akathist of Mother Mary with 24 scenes. The lines of the songs about Mother Mary were quoted in the compositions and on this basis the artist depicted a detailed epic narrative about the most momentum gathering points in her life – Annunciation, Nativity, Escape to Egypt etc. Again in the narthex one can see the largest composition in the church – the Tree of Jesse. The lower band shows full-size depictions of antique kings and philosophers – Solon, Pythagoras, Socrates, Homer, Aristotle, Plato, Plutarch and others.

The figure of Jesse is in the middle, the founder of Prophet David’s family from where the Tree of Jesse took its roots – the genealogic tree of the Family of Christ. Its branches display the images of some of the most significant Old Testament figures: the Prophets and Kings David, Solomon, Rehoboam, events related with the lives of Mother Mary and Christ. A large circular Christ Pantocrator is depicted in the vault surrounded by medallions bearing the depictions of angels, of Mother Mary and John the Baptist. The portraits of John, Mathew, Mark and Luke and their symbols were situated in the four corners. The frescoes in this part of the church were completed in 1638. 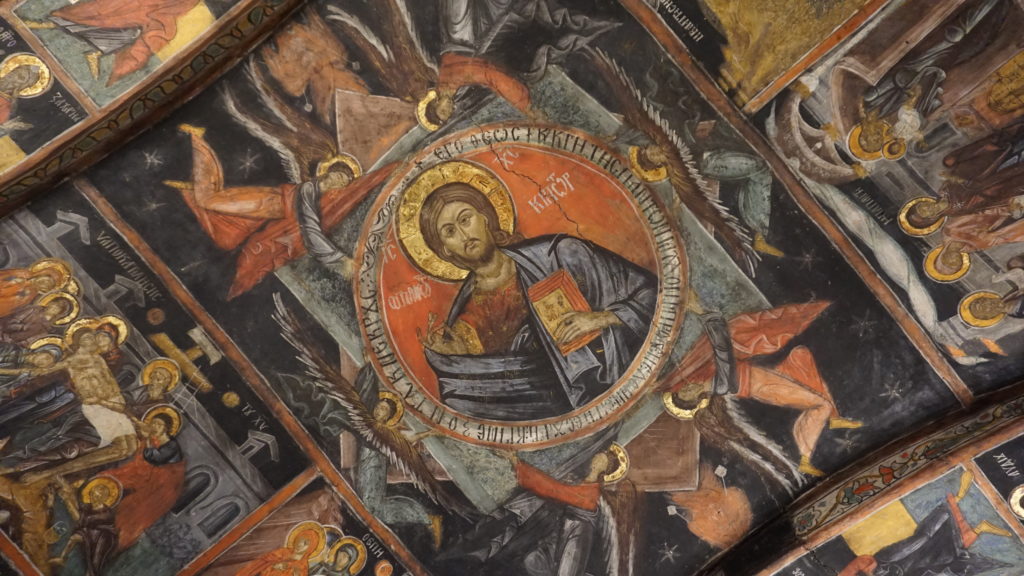 The frescoes in the naos of the chapel were dedicated to the life of the patron, John the Forerunner and his miracles. The paintings date back to 1632. The following compositions were presented on the walls: Mary’s meeting with Elizabeth, the Nativity of John the Baptist, Baptism, the Beheading of John the Baptist and others.
Christ Pantocrator was depicted in the dome of the vault and next to it by the altar one can see Mother Mary, Platitera. There is a superb gilded iconostasis in the chapel which is one of the earliest masterpieces of the Bulgarian woodcarving art.

The walls in the narthex of the chapel and the eastern part of the gallery abound in numerous small scenes painted during the period of 1643-1649. These are depictions of martyrdom of saints (Menelogue) covering all the days of the church year. The stories of this section of the composition are completed by the edifying scene of ·Vain Life in a Vain World­” or the ·Wheel of Life” complemented by the zodiac signs. The illustrations to David’s psalms reveal a number of elements from the lifestyle of the people inhabiting Arbanassi.
A great deal of the decoration in the gallery is devoted to scenes from the Old Testament: the Creation of Adam and Eve and the Primary Sin, 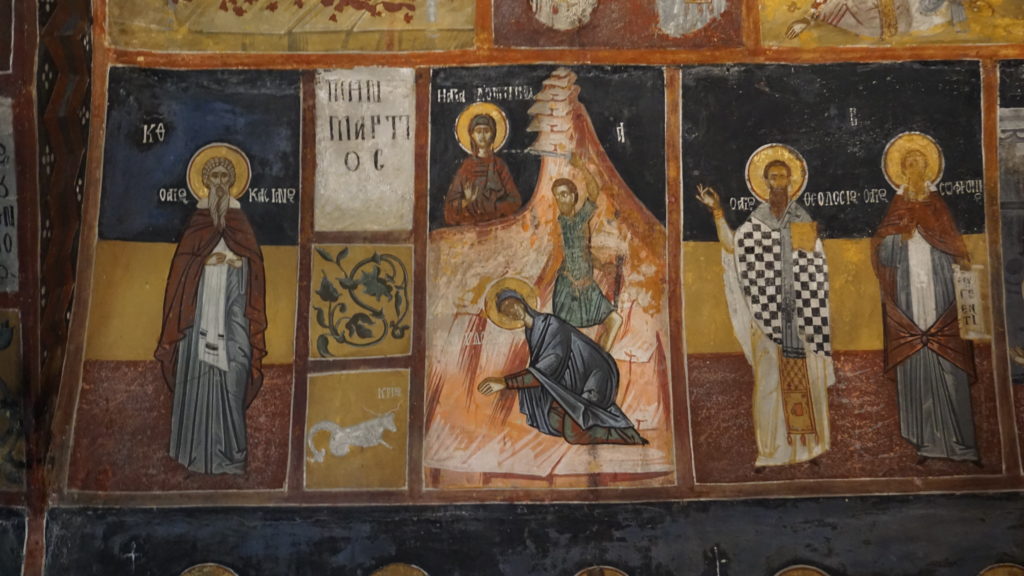 Cain killing Abel, a cycle devoted to Moses, scenes from the life of Noah, Joseph, David and others. In this part of the church one can see the Miracles of Christ, scenes from the lives of St. George and St. Nicolaus. Particularly impressive are the multi-figure compositions depicting the Seven Oecumencial Councils. They reaffirm the Orthodox religious norm.